This guide will explore the growing problem of online abuse and attacks. Many councillors experience this sort of negativity on social media. It is important to know how to identify it and effectively deal with it 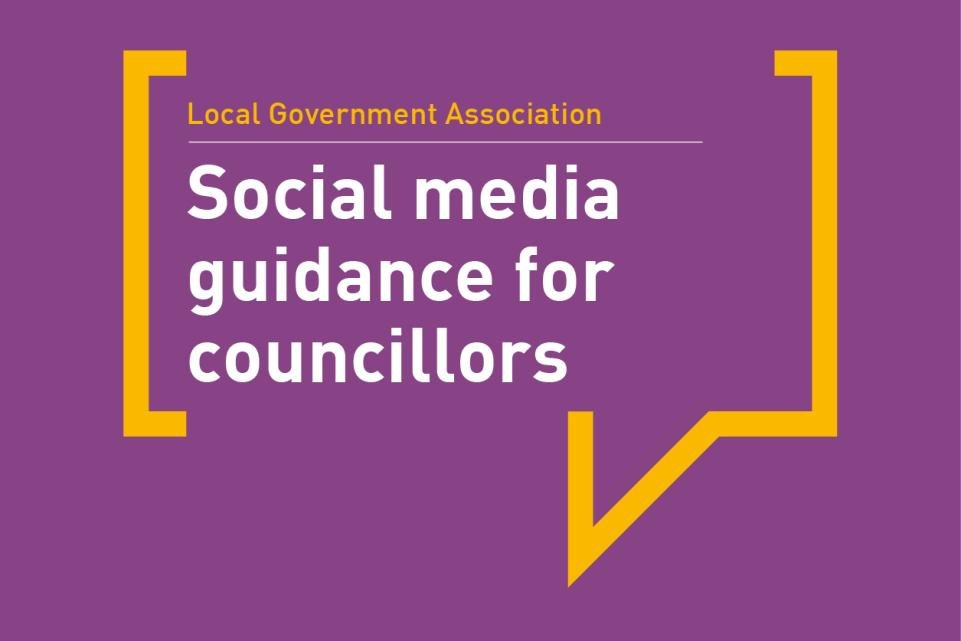 The LGA has produced a series of guides to support councillors in using social media.

Social media offers many opportunities for councillors to constructively engage with their communities. Most of the time this is a positive experience. Social media helps you to build a profile, explain complex issues in plain English and to develop a two-way conversation.

Unfortunately, in a small number of cases, councillors can experience online abuse. Social media is an environment where some individuals use abusive behaviour, such as aggressive language, threats, trolling and bullying.

Types of abusive behaviour to look out for on social media

Online abuse is an issue on every social media platform. Sometimes, it will be random or short-lived. On other occasions it can be more sustained and led by users who are often described as ‘trolls’.

A troll is someone who posts just to get an emotional reaction or to manipulate others’ perceptions. Their posts can be offensive, off-topic, inflammatory, purposefully inaccurate, or insincere. Trolls often do this for their own amusement or in aid of goals such as disrupting the democratic process.

All too often, trolls post without thinking, logic or good reason. It is important to remember that trolls often do not believe what they themselves are posting.

Many issues that councils deal with are complex. From inside the council this is clear. From the outside it can appear like ‘nothing is happening’. Sometimes it can be difficult to explain in plain English why a simple solution will not work.

Some people in the community will have their own ‘simple’ or ‘common sense’ solution to a problem. This can lead to people making the ‘Why can’t they just…?!’ social media posts.

Residents often consider councillors and councils to be ignoring them when their simple solution is not considered or implemented. The problem is compounded by the fact that some ‘Why can’t they just…?!’ posts are picked up by the local media.

Problems can also emerge when people are pressed for detail on how the ‘simple solution’ would work. Providing information that shows that a ‘simple solution’ will not work can cause some people to become aggressive, incoherent and defensive.

Challenge and scrutiny are a key part of our democracy and of the decision-making process. For example, it can help us to see where a decision might be having an unintended or negative impact. This feedback is critical.

Challenge and scrutiny should be constructive. It should not lead to offensive language and abusive behaviour. There is an important line that should not be crossed – between legitimate challenge and online abuse.

Councillors should not seek to stifle debate or to censure views. However, they should not be put in a position where they are subject to offensive language and abusive behaviour.

There is an important line that should not be crossed – between legitimate challenge and online abuse.

Politics is similar to challenge and scrutiny. It has an important role to play in debate and clearly forms an important part of the democratic process.

Councillors should not seek to suppress other people’s political views. However, political debate does not give people a licence to abuse elected officials online (or anywhere). Once again, there is a clear line between healthy debate and online abuse.

A smear campaign is the deliberate attempt to negatively impact a person’s standing or damage their reputation. Smears are usually done through the spread of false information and discrediting tactics. They can be ‘one-off’ comments. Unfortunately, some are sustained and organised.

Smear campaigns can be one of the hardest forms of online abuse to deal with. In some cases, it might require legal advice to be taken or for the police to get involved. Remember to keep a record of the abuse and report the issue to the social media platform and authorities as appropriate.

Unfortunately, online bullying and harassment has become more common in recent years. While it often appears in the press in relation to teenagers and young people, it is something that can affect anybody.

Online bullying or harassment occurs when someone bullies or harasses someone else online. It includes a wide range of behaviours such as threats, sexual remarks and hate speech. In some situations, it can form a sustained pattern of behaviour.

Use positive language and tone to shape engagement

Your digital ‘tone of voice’

Using language to shape the conversation

The language councillors use on social media is critical for building their tone of voice. When you are being attacked, it can be hard to avoid using aggressive language yourself.

Even when it seems to you like it’s the only option – using aggressive language never improves the situation.

Councillors should always try to stick to positive and inclusive language. This helps to control the nature of the interaction and keep things as constructive as possible.

Social media language is often ‘chatty’. It is important to make the language you use as accessible as possible. Avoid acronyms and ‘council-speak’. It is common for councillors to use acronyms for their own council or a committee (for example VFM rather than Value for Money Committee). Not many people in the community will understand what such acronyms mean.

People are generally much more rational if treated with kindness and compassion. It is important to be seen by those watching the discussion that you are putting your argument across in a calm, patient, and professional way.

Try to find some common ground that allows you to calm the debate and show those that are in the discussion that you share similar priorities or come from the same background as them.

Usually, councillors will live in the community they represent – so, that can be a great place to start disarming those who are being aggressive by making common cause about your community.

Asking people ‘how’ rather than ‘why’

Asking people ‘how’ – rather than ‘why’ – is a good way of working through how things would work in practice. Talking about how this would play out rather than dwelling on why it is (or is not) a good idea can help to engage people constructively and expose the complexity and flaws that make their simple-sounding suggestion difficult in reality. This forces them to reassess their argument and prompts a more moderate attitude.

Engage with a variety of views

Building up your following on social media means that it is harder for a small number of angry voices to dominate. It also allows you as a councillor to hear from, and engage with, a wider variety of people from across your community.

It also ensures that more people will be able to see and share the arguments you are making in response to attacks. Treating people with respect even if they are not affording you the same courtesy will build further on your tone of voice, as a larger audience will see the way in which the debate is conducted.

Have a consistent narrative

Sharing a consistent story to fill gaps in people’s knowledge helps you to dispel conspiracy theories and baseless rumours by presenting a clear and credible narrative.

Escalation of an issue

In some situations, you can escalate an issue. If there is a complaint about a council service it can be a legitimate course of action to ‘pass on’ the issue to a council officer. Depending on how the complaint was made, you might need to consider data protection issues. Sometimes taking this course of action and being able to demonstrate that action is being taken can help to defuse the situation.

The wider audience – who is looking?

In some situations, you might feel there is a need to reply – to get the truth out there or to set the record straight. It is important before replying that you consider the likelihood that you will succeed. It is important to ask yourself – who is the wider audience?

Making a balanced and reasoned argument has value when there is a wider audience watching the discussion. Most of those seeing the exchange will not actively engage. In this situation ‘winning’ means ensuring that those looking on are reassured and given accurate information.

Conversely, if you think no one is looking you need to ask yourself the question – is it worth responding?

If you respond, you should avoid getting sucked into a lengthy debate on social media. Not only is this very time-consuming, but you are also very unlikely to get the last word in the debate.

When you receive online abuse, you should make a record of it. This is important in case the matter develops further – particularly if the police or other bodies become involved. It is also useful in demonstrating a pattern of behaviour.

Trolls can be difficult to deal with. The best way to deal with a troll is ‘not to feed it’. By which we mean, don’t respond to a post which is designed to upset, elicit a response, or to further a troll’s own goals.

Your best response is to either:

If that doesn’t work, consider your next step. This could include blocking them or reporting them to the social media platform or the police.

Most social media platforms give you the ability to delete comments. Where someone has made an abusive comment, you might want to delete it. You should remember to take and save a ‘screen grab’ picture first.

Some social media will give you the ability to automatically moderate content. Some have a ‘profanity filter’. Where this facility exists, you should consider using it. It will save you time and reduce the impact of abusive comments and behaviour.

On almost all social media platforms you can block individuals who are persistently abusive. If individuals are consistently aggressive it can be both sensible and reasonable to block them from further engaging with you.

It is important to remember that, as a councillor, you do not have to accept abusive behaviour. You have as much right as anyone to be treated with dignity and respect. You can include our LGA Digital citizenship ‘rules of engagement’ infographics on your profile to make it clear to others that you will not tolerate abusive behaviour.

Blocking those who are abusive is important both for you as a councillor and for other people who follow you who may feel intimidated by aggressive behaviour. They also have a right to express their views.

Reporting an issue to the social media platform

Most social media platforms have ‘rules’ or ‘terms of use’ that prohibit abusive behaviour. Each has different wording, but most forbid behaviours that are abusive, bullying, harassing, or intimidating.

If you feel someone has broken a social media platform’s ‘rules’, you can report the user to the platform in question. It will then be up to the platform to take further action.

Reporting an issue to the police

Reporting a breach of the Code of Conduct

In some situations, you might feel that taking legal action is a legitimate course of action. You should balance up the risks of this approach and carefully consider the likelihood of success. There is also often a financial cost involved with this approach.

Valuing your mental health and wellbeing – when is it time to get off social media?

If abuse is persistent and harming your mental health, and that of those around you, it may well be time to leave social media. This can mean deleting accounts entirely or just taking a break from them for a while.

Some social media platforms allow users to temporarily ‘unpublish’ or ‘deactivate’ accounts. In this instance, some people find that trying a new platform can be useful – for example, trying out Instagram instead of Facebook.

There are well documented mental health benefits to coming off social media for either a fixed amount of time or permanently.